No more tape over my mouth 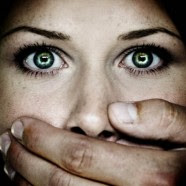 I am perfectly sick of being timid when it comes to speaking my mind. I don't care how it makes anyone feel, who is horrified, or who I offend, this is me and I'm done hiding behind my fear of judgement and un-acceptance. I think it took me being infuriated while browsing facebook today to feel that there is no good reason for me to shove my anger and frustration under the rug day after day. So here goes.

I was molested as a young teen. A man living under my parent's roof, paying his rent by helping with the remodeling of our home, in training at Greyfriar's Seminary to become a pastor , groomed me, sexually abused me, and molested me from the time I was 13 until I was 16 years old. He was 10 years older than me. A true monster; I was made to feel worthless, as though no one but he would ever love me. I was told that if I ever told anyone, it would ruin his life because people simply wouldn't understand what we shared. I became an expert at lying to my parents. I was forced into sexual acts time and time again that no young girl should ever be subjected to. When I was 17 years old, a friend whom I had confided in (and who I am forever grateful to) convinced me to go to the police and press charges against my abuser. After much persuasion from her, I went to my parents and to the police. The process that followed was long, painful, traumatic and awful. During this time, I was offered little to no support from the church I attended, in fact, on the day of the sentencing my former pastor and my abuser's pastor sat on *his* side of the courtroom, successfully compounding my own feelings of guilt and shame. I felt terribly alienated and many times regretted every saying anything about the abuse. Sadly, my story did not have a just ending. My abuser, who was originally charged on 3 counts of "child sexual abuse", "lewd and lascivious acts", and "forced sexual contact", was convicted of "injury to child"- the same term that would have been used had he slapped a child on Main Street. We were encouraged to go to mediation rather than to trial, and at the last minute the visiting judge decided the sentence/label of 'sexual offender' was too harsh. He equated what had happened to a "homeschool teenage love affair", despite the fact that my abuser was 10 years older than me. As a result, rather than being labeled as a sex offender (which was the only outcome I desired), his charge was lowered and he was sentenced to 4 months in Cottonwood prison and a few years on probation (which he was released from early a few months ago). After serving his sentence he was free to go. Free to live and roam wherever he pleased, which just so happened to be right back to Moscow, back to his lovely old church, back to MY town, where he now lives a normal life, owns his own construction company, and eats at his favorite downtown restaurants. Clearly he felt terrible about what happened. Clearly he felt shame and disgust with himself. Bullshit.

Now I see him once every week or two and though I no longer attend the church in which it all took place, many of the friends I still associate are friends with he and his family. While on facebook today I received an invitation to attend the baptism celebration for his most recent child. Years ago, I received letters from the church after I left telling me I was under church discipline and could no longer take communion there, meanwhile my abuser was welcomed back into the fold with open, loving arms...And people wonder why I left.

I am completely ok with admitting that I hate this man. I live my life, I am healing, and I have chosen to take my past and be stronger because of it, which I respect myself greatly for, but not everyone is so lucky. There are myriads of young girls used and abused who don't heal and can't move on. Too many women who suffer abuse are made to feel as though they have no voice and no place. The lack of justice in my situation is extremely common and more often than not, sexual abusers and pedophiles are let off the hook because of our own inability to face the issues. Yes it's uncomfortable to talk about but IF WE DON'T talk openly about these issues with our daughters we are potentially exposing them to the same harm we suffered. STOP THE ABUSE, don't let it continue any longer. I will attempt with every bone in my body to teach my daughter to respect herself and to demand respect from other people, something I was neither taught nor practiced.

So I will say it now; I am not ashamed, I will not keep quiet, and I care not what anyone thinks of me - I have only myself to answer to. Pardon my language, but here's a big 'Fuck You' to my abuser and those who defend him. He is a criminal and deserves to be treated as such.

My daughter will know my story and I will equip her with the tools to protect herself.

"There may be times when we are powerless to prevent injustice, but there must never be a time when we fail to protest."
~Elie Wiesel